← more from
Innovative Leisure
Get fresh music recommendations delivered to your inbox every Friday.
We've updated our Terms of Use. You can review the changes here. 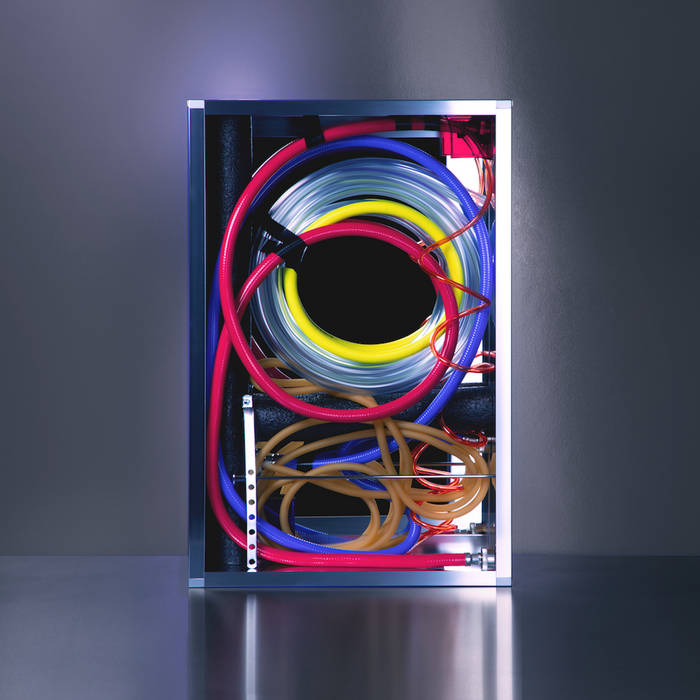 In his perpetual quest to discover new ways of perceiving the real, the French artist Yves Klein once declared that he wrote his name on the “far side of the sky.” In the six decades since, the shock of the original has gradually become a distant ideal. Tedious nostalgia and microwave immediacy have become commonplace. Shattering boundaries becomes more difficult when anything goes and nearly everything has been done.

But if a narrative through line exists throughout Jimmy Edgar’s work, it’s his gift at deconstructing convention, whether through sound design, fine art, or live performance. In an era increasingly bereft of surprise, the Detroit-bred iconoclast’s career has been refreshingly unpredictable; he’s an escape artist capable of wriggling out of any predictable trap or rote cliché, a fearless seeker eternally leaping into the void.

His latest release for Innovative Leisure, LIQUIDS HEAVEN, is a psychedelic canvas of future R&B, euphoric bass, mutant tear-the-club-up rap, foundation-splintering noise, and gossamer soul. On a surface level, it is a starburst of avant-garde fusion, collecting a diverse cast of eccentric geniuses and re-configuring them into an anthology of nü musique concrete. But as with all of his work, there is a deeper and subversive intent.

The record’s early gestation spawned from Jimmy’s explorations of “material” in the digital world. Despite their apparent intangibility, he realized that they do possess a certain physicality, in some sense. If the experiments in materiality conducted by Klein and other 20 th Century conceptual artists began by placing everyday objects in galleries, the new millennium calls for the next advancement. The album is part of Jimmy’s broader ambition to change belief and intention in the digital realm – a pseudo-invisible way to summon novel realities by infusing his ultra-sleek aesthetic into transformative conceptual art.

LIQUIDS HEAVEN is the ultimate culmination of the idea of “phases of matter.” Asking “what would liquid desire?”, Jimmy conceived the sculpture on the album cover. Depicting a surgical medicine cabinet with rubber tubes inside, the image simulates a heaven that liquid could enjoy and love – a fluid playground. The sound is its own mesomorphic fluorescent magma, all-powerful, holding the shape of its containers, infinitely evolving. Sculpture by invisible electronic air pressure.

Do not mistakenly believe, however, that LIQUIDS HEAVEN is merely a technicolor dream of ethereal abstractions. It bangs as hard as anything to ever bump from a subwoofer. Over a polychromatic blast of crunk, 10KCaash and Zelooperz bounce on “Everybody” like a rap rave inside a 31 st century space station. “Bite That 2” finds Trinidad James spitting flames over booty-shaking, wall-crumbling bass. On “Ya,” 645AR chirps over a metallic chassis of booming industrial funk.

But for all the high energy propulsion, there is a counter-balance of melancholic beauty. The album’s opener, “Euphoria” features a Liz Y2K vocal that levitates with plaintive longing. The Milk-aided “Dreams 1000000” sounds like the chimerical soundtrack to a manga utopia that needs to be imagined. Milk also appears on the finale, “Never Leave,” which captures a bittersweet sadness, the wistful emotion of the tide slipping away.

It would be more surprising if LIQUIDS HEAVEN wasn’t surprising. Jimmy’s career has been a series of fascinating left-turns. Signed to Warp Records as a teenage electronic music prodigy, his body of work needs a scholarly bibliography to properly assess. He’s recorded for the world’s most respected imprints (Warp, K7, Hotflush, Innovative Leisure and his own New Reality Now). Raised in Detroit, there have been stints soaking up inspiration in Berlin, Atlanta, Los Angeles, and New York. His list of close collaborators includes the most innovative musicians of the millennium, including Hudson Mohawke, Danny Brown, SOPHIE, DAWN, Mykki Blanco, Vince Staples, and several full projects with Machinedrum as J-E-T-S.

Most recently, he has become a prolific and celebrated artist in the digital art space, which has become an integral part of his canon. With the goal of expanding the possibilities of conceptual art, Jimmy has used digital and internet native files to create single pixel magenta artwork. Screenshots are likened to paint strokes, meme images are re-contextualized. Dyson vacuum cleaners are hermetically sealed in plexiglass.

Jimmy is currently exhibiting a solo show of his digital works at Los Angeles’ Vellum gallery. Another upcoming project features 100 digital images where he deconstructed a surgical operating room and photographed the parts in a studio on a non-glare acrylic floor. This radical approach has been applied to his new live show too – which is a conceptual performance where Edgar isn’t physically present. Instead, Maija Knapp, an experimental dancer performs in front of his abstract visual animations.

The genius of LIQUIDS HEAVEN is that for all its cerebral intent, it remains replete with raw and visceral emotion. Out of sadness comes courage. Water, liquid, and light evaporate, become transparent, disappear peacefully. Nothing less than the sound and look of liquid are transmuted into powerful new sculptures – which are best experienced at a high volume on the far side of the sky.

“Detroit experimentalist and texture king Jimmy Edgar is the kind of producer that opens a doorway in your mind.” - BILLBOARD

“evokes a thrilling future of club music without borders.” - PITCHFORK

“a genre-bending, boundary-pushing producer in the world of underground electronica and hip-hop.” - HYPEBEAST

“A mind-melting, genre-bending triumph in hyperpop (and beyond.) One of the finest - and weirdest - cross-over records of the year" - RESIDENT ADVISOR

“A glistening blend of textures in hi-def” - DUMMY

Sampa The Great joins the show to discuss her release, "As Above, So Below".